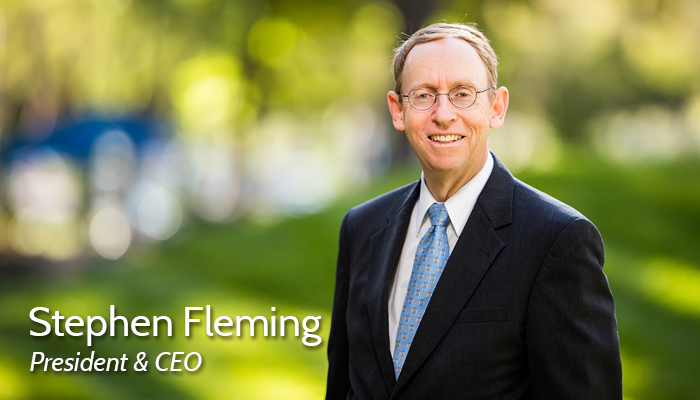 Follow Steve on LinkedIn
Since September ’08, Steve has been President & Chief Executive Officer of River City Bank, the largest and most profitable bank based in Sacramento. Under his leadership, the Bank has nearly quadrupled in size from $800 million to over $3.5 billion in total assets.

He has over 35 years of banking experience, including over 20 years with Bank of America in Sacramento and London, England. While with Bank of America, he held a variety of progressively more senior positions, including serving as the head of Capital Raising and a member of the Executive Committee for the Bank’s Europe, Middle East, and Africa Division.

Immediately prior to joining River City Bank, he was the Founder and CEO of Presidio Bank in San Francisco. He was also the President & CEO of National Bank of the Redwoods in Santa Rosa.

Steve has been involved in a variety of charitable activities over the years, including currently serving as a board member for the Kelly Foundation. He is also on the board of the Greater Sacramento Area Economic Council, a member of the Sacramento Host Committee, President of the Sacramento chapter of Lambda Alpha, the honorary society for the advancement of land economics, and President of the Capital Region Family Business Center. 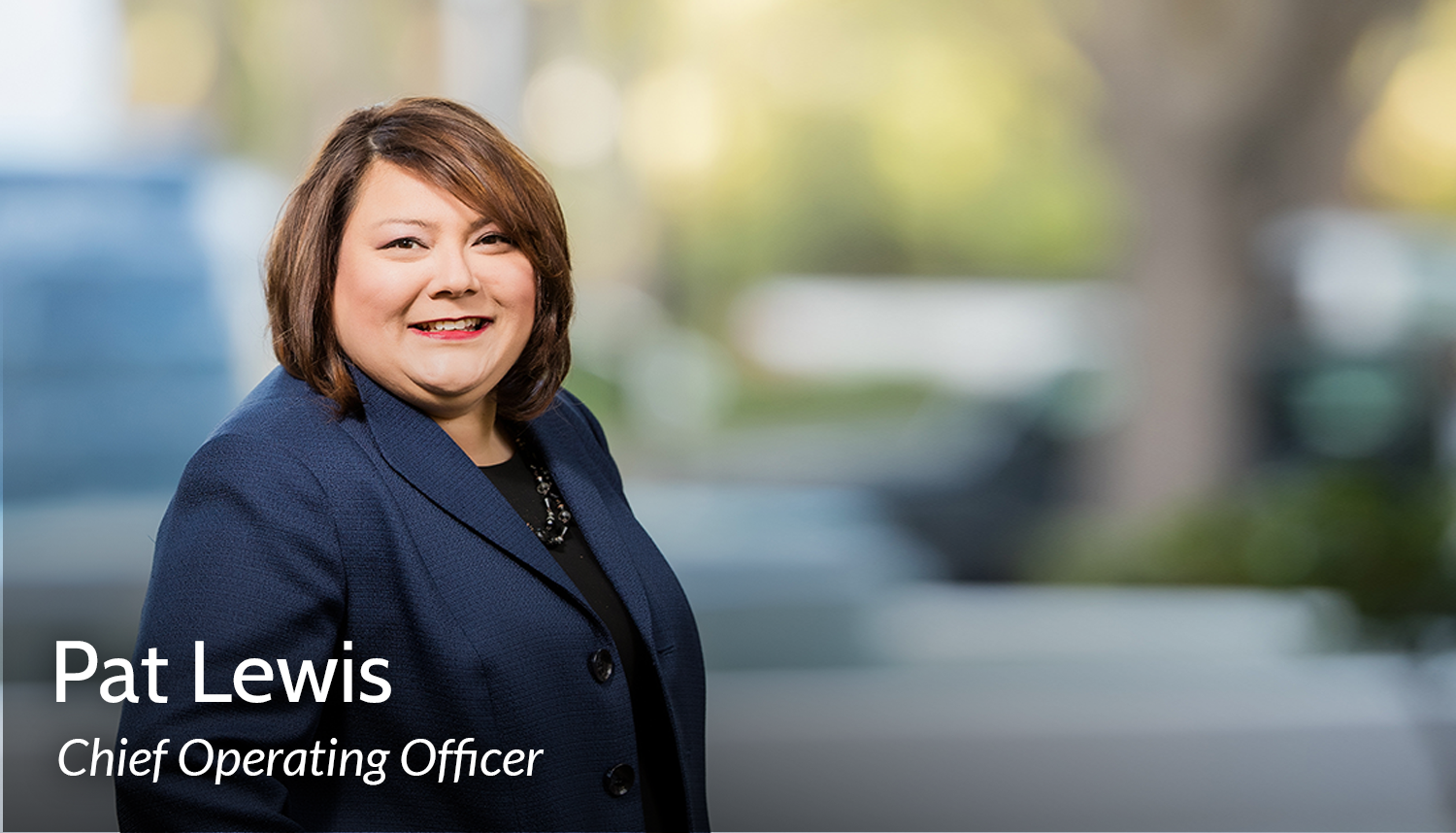 Follow Pat on LinkedIn
As Executive Vice President, Chief Operating Officer, Pat utilizes her over 25 years of financial-services experience to manage the bank’s operations, ensuring compliance with policies and procedures, and maintaining the premier level of client services upon which River City Bank has established its reputation. Pat has almost 20 years of experience with River City Bank having held such positions as Senior Vice President, Commercial Banking Director and Vice President, and Cash Management Director. Pat has built a highly successful career based on hard work, great people skills, and the overwhelming desire to provide exceptional customer service.

Pat holds a Bachelor of Science from Texas A&M University and a Master of Business Administration from Baylor University.  Raised in Texas, California is home. Pat is active in the community and is currently serving on the Programs Committee of the Capital Region Family Business Center, performs volunteer work benefitting U.S. veterans, and is a youth sports advocate.  When she is not busy at work, she and her husband enjoy spending quality time with their son. 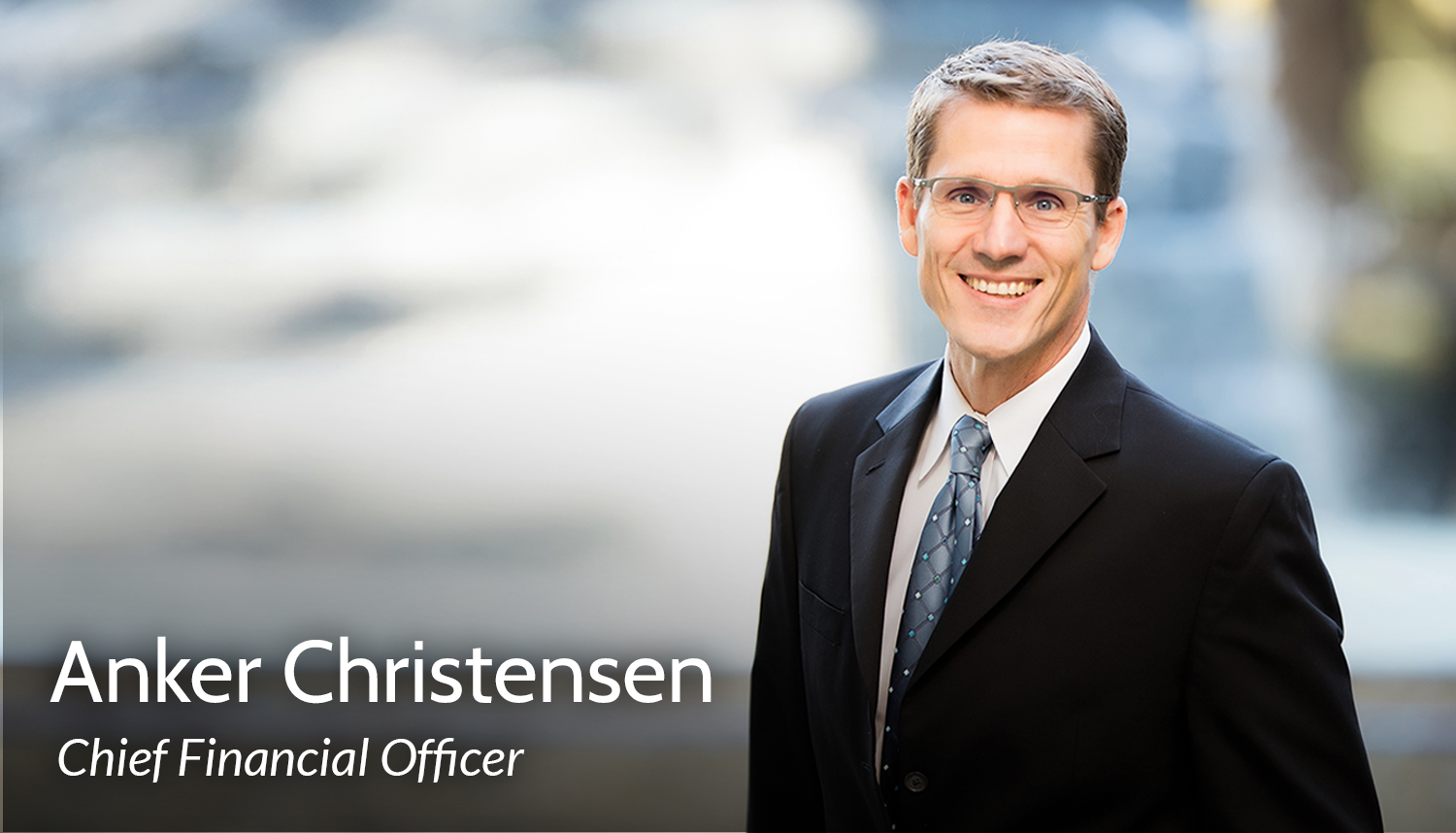 Anker has been with River City Bank for 18 years and manages all financial reporting, asset liability management, and budgeting for the Bank. He is also the Executive lead for the ALCO Committee and a member of the Risk Management Committee.

Prior to River City Bank, Anker was a Senior Manager with KPMG LLP US, where he spent 14 years providing audit services, merger and acquisition consulting, Sox404 compliance consulting, and SEC reporting services to clients in the financial services industry. Other industries served included biotech, manufacturing, and government.

Anker attended California State University, Fullerton, earning a Bachelor’s degree in Business Administration with an emphasis in Accounting. Married with three sons and residing in Newcastle, Anker is a Special Olympics Coach and involved with various activities associated with Doxa Church. In addition, Anker serves the community as an active board member for Easter Seals of Sacramento (Treasurer and Finance Committee Chair), Covenant Initiatives for Care, and the Kelly Foundation. 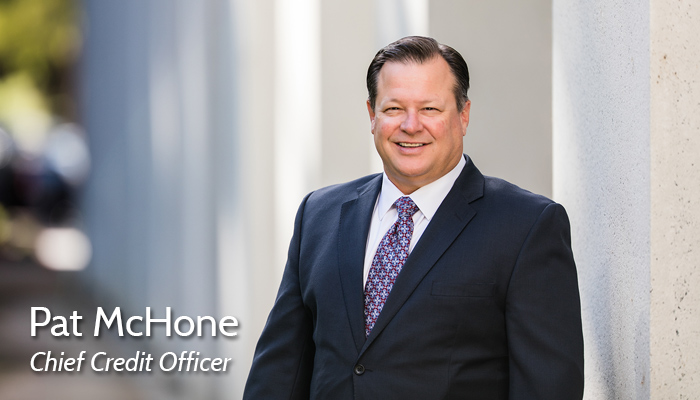 Follow Pat on LinkedIn
As Chief Credit Officer, Pat McHone has been an integral member of River City Bank’s executive team since 2008. In his role, Pat is responsible for all aspects of overseeing loan production and credit quality for the Bank’s portfolio of consumer, business banking and commercial real estate loans.

To maintain River City Bank’s solid loan portfolio, Pat places a strong emphasis on knowing our borrowers inside and out, including every aspect of their financial position.

With more than 30 years of experience, his banking career includes 16 years as Senior Vice President and Sacramento Valley Region Manager at Mechanics Bank and seven years at Security Pacific Bank. 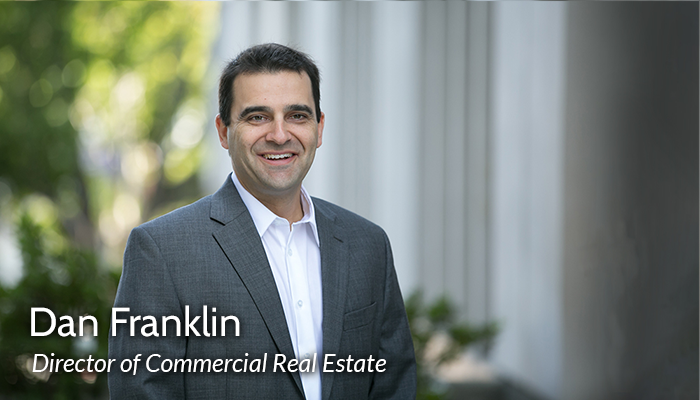 Follow Dan on LinkedIn
Dan Franklin is responsible for managing River City Bank’s commercial real estate origination activity in California and throughout the western United States.  Dan joined River City Bank in 2008 and has also held the positions of Relationship Manager, Business Development Officer, and Commercial Banking Director. With a heavy focus on customer service, strong analytical skills, and an in-depth understanding of the bank’s culture, Dan has been instrumental to the bank’s rapid growth over the past several years and is continually a top producer. Before joining River City Bank, Dan was a Relationship Credit Manager at Presidio Bank in San Francisco.

Dan received his undergraduate and MBA degrees from the University of California at Davis and is a recipient of the Chartered Financial Analyst designation. 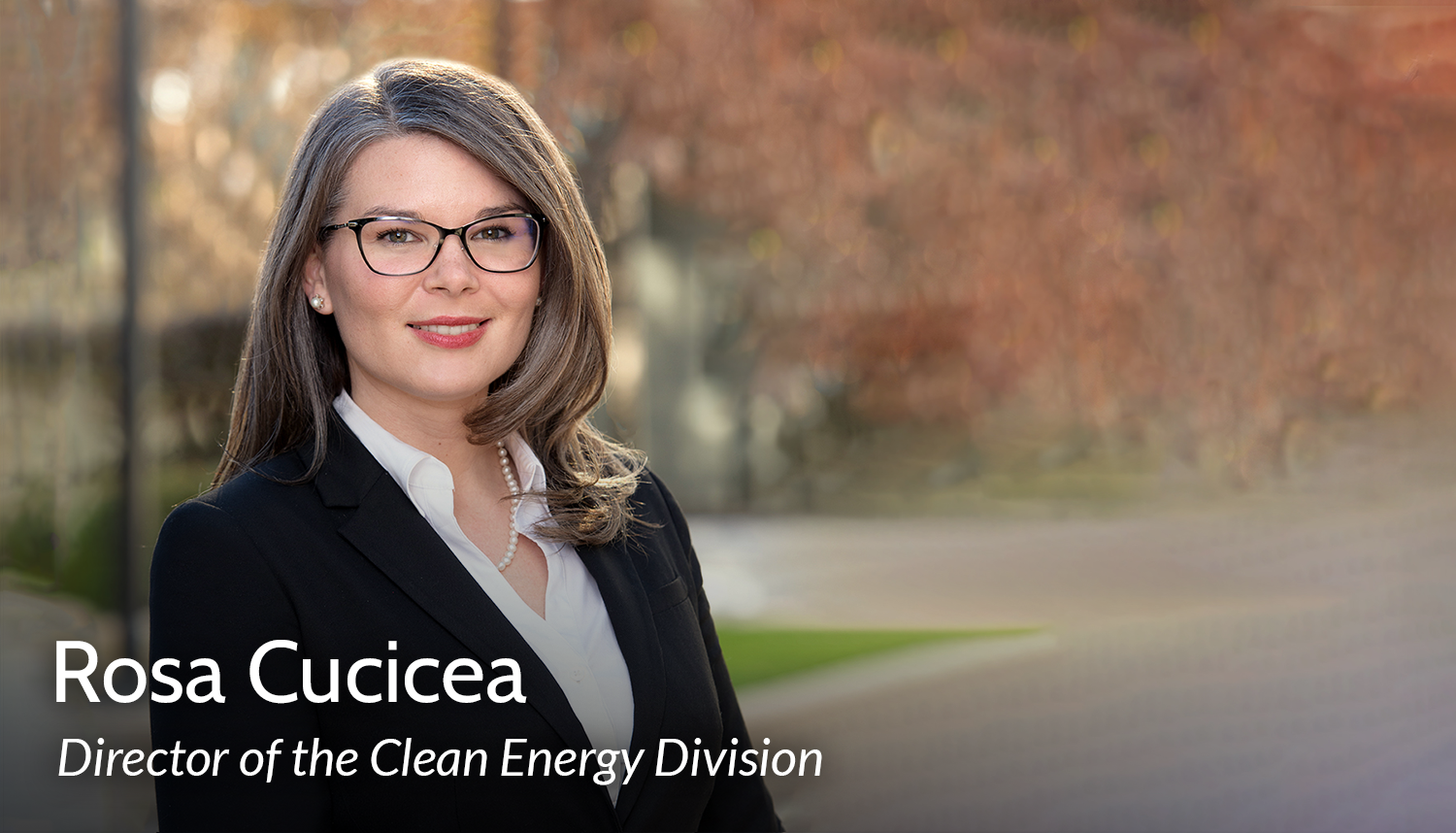 Director of the Clean Energy Division

Follow Rosa on LinkedIn
As Senior Vice President and Director of the Clean Energy Division, Rosa is responsible for growing River City Bank’s services for clean energy companies. Under her stewardship, the bank has become a clean energy leader in California by serving a majority of the state’s Community Choice Aggregators “CCAs”, financing renewable energy projects, and supporting other local sustainable efforts. Rosa joined River City Bank in 2014 and has also held the positions of Cash Management Representative, Credit Analyst, and Relationship Manager prior to establishing the bank’s Clean Energy Division in 2018.

Rosa graduated with honors from the University of California at Davis with a bachelor’s degree in economics and will graduate in 2023 with an MBA from the Berkeley Haas School of Business. 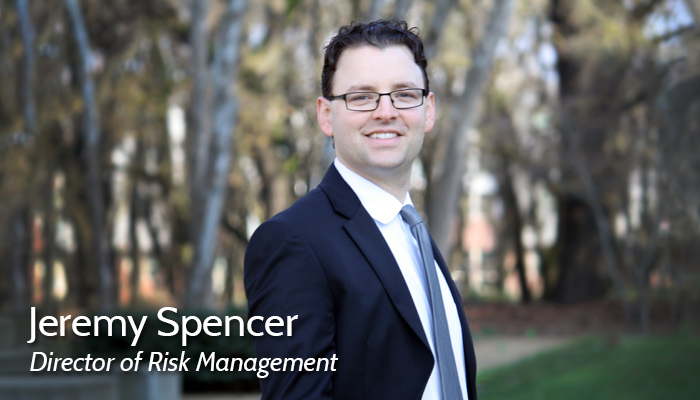 As Senior Vice President, Director of Risk Management, Jeremy Spencer oversees the compliance, information security, and internal audit departments. In addition, he is the Executive lead for the Audit Committee and Compliance Committee.

Prior to River City Bank, Jeremy was a Senior with KPMG LLP US, where he spent 5 years providing audit services, Sox404 compliance consulting, and SEC reporting services to clients in the financial services industry. Other industries served included, agriculture, property management, and government.

He attended California State University-Chico earning Bachelor’s degrees in Business Administration (emphasis in Accounting) and in Spanish. Jeremy loves to travel and enjoy the outdoors with his wife and two sons. He is active with BSA Scouts and has held numerous roles, including Den Leader and Cubmaster. In addition, Jeremy acts as a Finance Committee member of the Sacramento Tree Foundation. 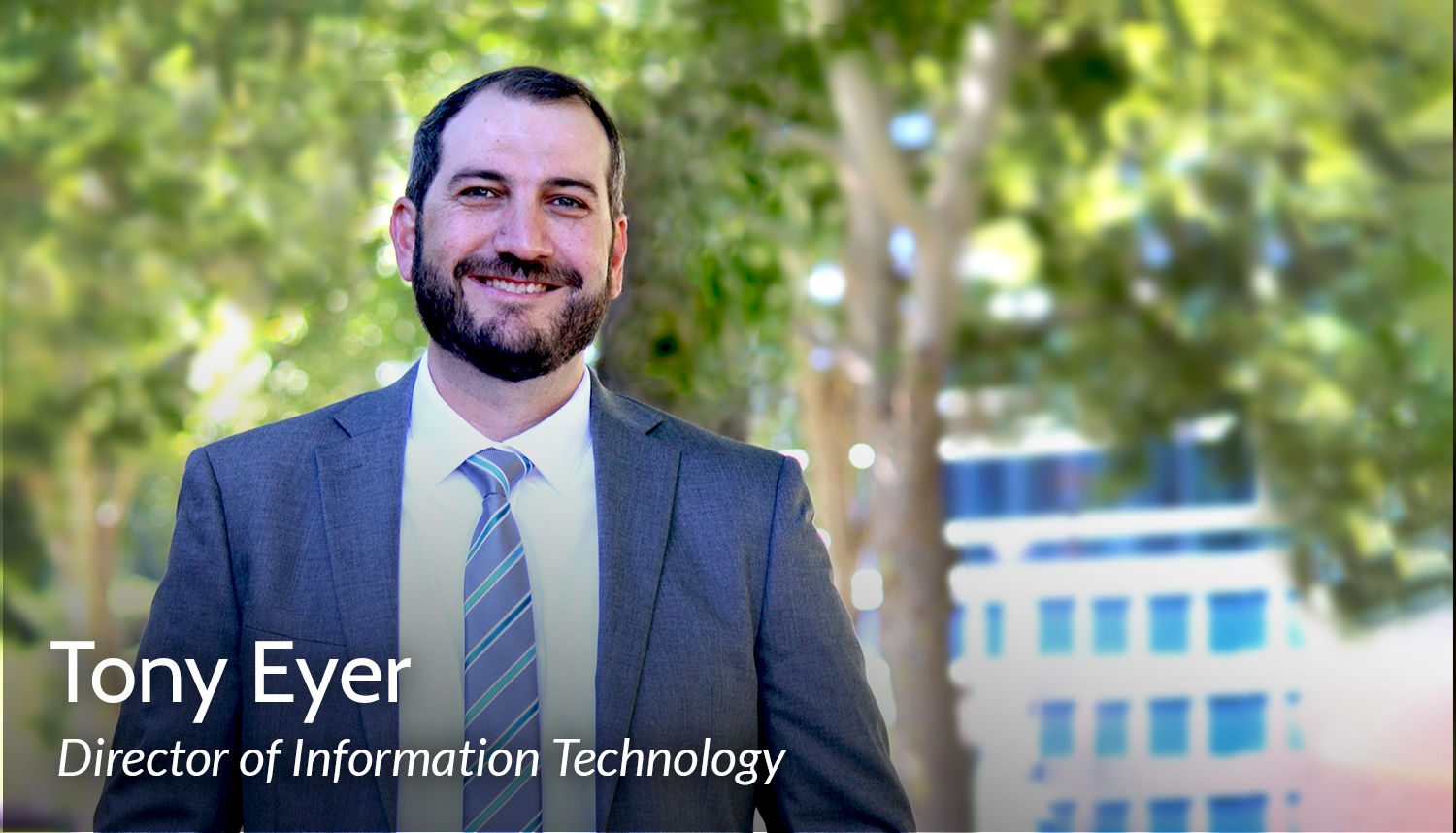 As Senior Vice President, Director of Information Technology, Tony utilizes his 20 years of IT experience to provide leadership for the continued growth of an innovative, stable, and secure information technology environment throughout the Bank.

He earned his MBA in Information Technology Management from Western Governors University. Tony is married, has three daughters and resides in Roseville. You will find him cheering on his daughters in multiple sports activities or on the golf course working on his putting. 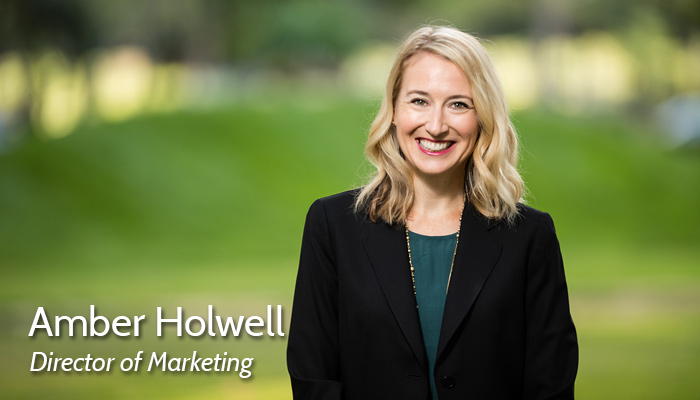 Follow Amber on LinkedIn
Amber manages and oversees the marketing function for River City Bank. Her diverse responsibilities include developing and executing the Bank’s marketing plans, organizing and conducting the Bank’s signature events within the business community, and managing the daily operations of the marketing department.

Before joining River City Bank, Amber was the marketing director of a Denver-based national law firm and served for more than six years as a sales and marketing manager for a national real estate marketing and development company in Chicago. She earned a Bachelor’s degree from the University of Colorado at Boulder and has real estate licenses in California and Colorado. Amber currently serves on the Kelly Foundation board and has an active role in the Capital Region Family Business Center. She and her family reside in the Bay Area. In her free time, Amber can be found skiing, cycling, at a PTO meeting, or cheering on her kid’s swim team.