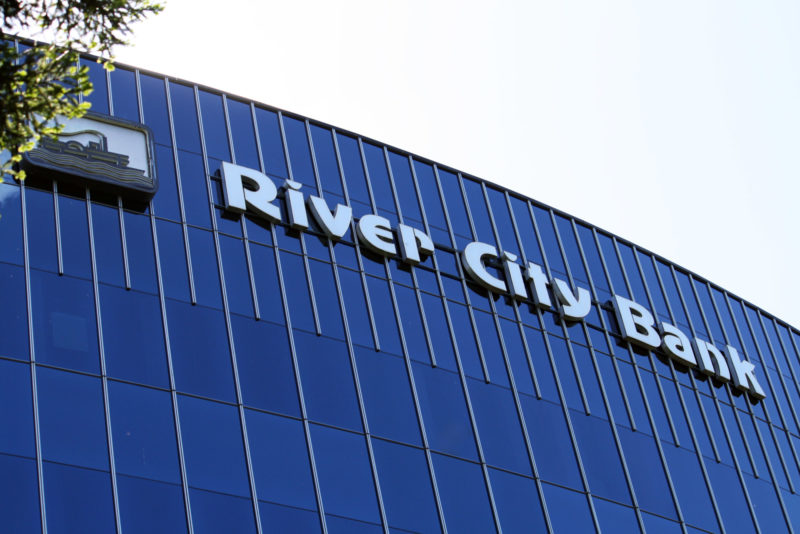 SACRAMENTO, CA — April 19, 2018 —  River City Bank (the Bank) reported net income of $5.5 million, or $3.82 per diluted share, for the quarter ending March 31, 2018, which compares favorably to the $4.2 million, or $2.93 per diluted share, for the same period in 2017. The improved net income versus the prior year quarter was driven by three factors: increased net interest income due to higher loan balances, reduced loan loss provisions due to slower loan growth in the quarter and lower federal tax rates due to the tax reform legislation passed in December 2017.

“Though, as we have been projecting, the pace of our loan growth has slowed significantly compared to the pace of growth over the last three years, the year over year growth in loans still contributed to the continued increase in our profitability,” said Steve Fleming, President and CEO of River City Bank.  “Our asset quality is exceptional with the ratio of nonperforming loans and OREO to total gross loans declining from an already low 0.29 percent as of March 31, 2017 to 0.01 percent as of March 31, 2018. Lastly, the Bank benefited from the decrease in the federal tax rate, which effectively added $912,000 to our bottom line through reduced tax expense.”

The loan growth has also been sufficient to mitigate the negative impact of the rise in short term interest rates and recent flattening of the interest rate yield curve. The Bank’s net interest margin declined from 2.89 percent to 2.75 percent for the quarters ending March 31, 2017 and 2018, respectively.

Effective January 1, 2018, the Bank adopted the new Derivative and Hedging accounting standard early. Through the adoption of the new standard, the Bank is able to account for its interest rate swap contracts using hedge accounting. Consequently, the Bank will no longer be subject to the significant valuation swings caused by the mark-to-market of its swap contracts as a gain or loss in non-interest income; rather, both the swaps and the loans being hedged are marked-to-market with the net difference recorded as an adjustment to loan interest income. The Bank recorded a nominal $75,000 reduction to loan interest income for the quarter ending March 31, 2018 as a result of the adoption of the new standard.

“Operational efficiency remains a core competency for the Bank, as evidenced by our 43 percent efficiency ratio for the quarters ending March 31, 2018 and 2017,” said Anker Christensen, chief financial officer of River City Bank. “Managing expenses continues to be a priority for the management team as it offsets the effect of our net interest margin compression.”

Shareholders’ equity for River City Bank on March 31, 2018, increased $4.4 million to $189.3 million when compared to the $184.9 million as of December 31, 2017. The increase was driven through increased retained earnings. The Bank’s capital ratios remain well above the regulatory definitions for being Well Capitalized. Common Equity Tier 1, Tier 1 Leverage and Total Risk-based capital ratios were 11.9 percent, 9.5 percent and 13.2 percent, respectively, as of March 31, 2018.